Companies of the Czechoslovak Group holding, and Tatra Trucks will present their products and services at the MSPO 2022 fair

The 30th edition of the prestigious MSPO – international defence and security technology fair, which is one of the largest in Europe, will take place from September 6 to 9 in Kielce, Poland. Companies of the Czechoslovak Group (CSG) holding, and Tatra Trucks are traditional participants at the fair and will not be absent this year either. 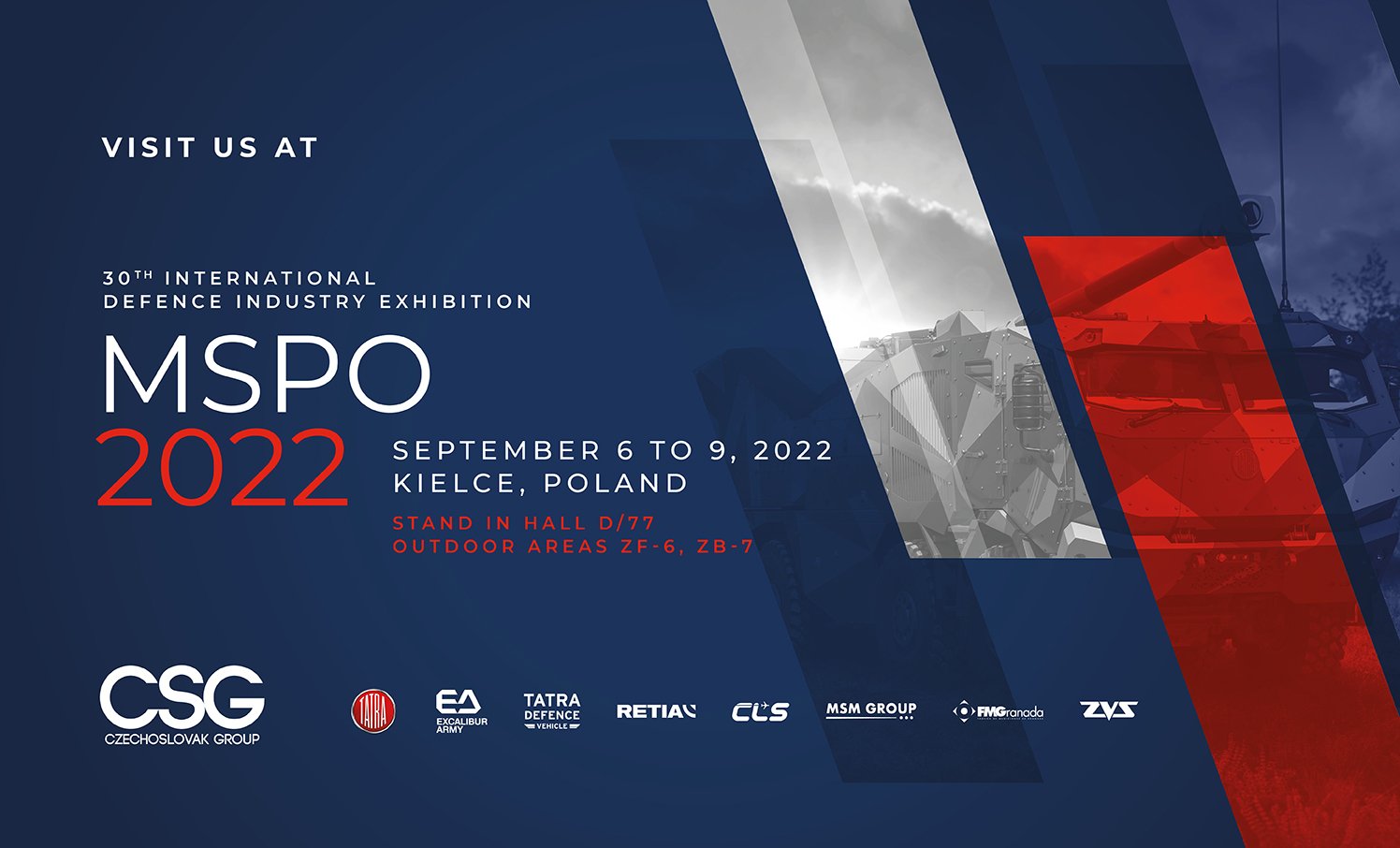 Last year, the joint exposition of companies of the CSG holding was well received, which was helped by, for example, the European exhibition premiere of the DITA 155 mm howitzer and the Polish exhibition premiere of the Tatra Tactic 6x6 military truck. In addition, the exhibition won the award for the best design. The importance of this award will stand out even more against the background of the fact that it was rated as the best among 400 exhibitors from 27 countries around the world, including participants from the USA, Canada, South Korea, Germany, Poland, Great Britain or Israel.

This year, the companies Tatra Trucks, Excalibur Army, Retia, Česká letecká servisní, MSM Group and Fábrica de Municiones de Granada will present their products and services at the MSPO fair. Tatra Trucks will present a new product seen for the first time at this year's Eurosatory – Tatra Phoenix military heavy tractor with a new armoured cabin made by Tatra Defense Vehicle (TDV) company. In addition, the truckmaker will also exhibit Tatra chassis in 6x6 and 4x4 versions suitable for various military applications and superstructures. Excalibur Army will also bring a fresh novelty to Kielce – the MORANA 155 mm howitzer, which also had its world premiere a few months ago at the Eurosatory fair in Paris. The howitzer, which is the main attraction of the CSG holding's joint exhibition, will be on display on the outdoor display area, similar to the DITA 155 mm howitzer last year.

The CSG Aerospace division will be represented by the companies Retia and Česká letecká servisní (ČLS). Retia will demonstrate in Kielce a model of its multi-purpose 3D radar ReGuard for detecting and tracking ground and low-flying targets and a small portable radar ReTwis 5 with the ability to detect live targets behind walls or other non-metallic obstacles. ČLS representatives will present the projects and services that the company is working on and that it offers, including modernization of aviation systems.

The Slovak branch of CSG holding, represented by MSM Group, will exhibit at the fair a wide range of large-calibre ammunition produced by the Slovak ZVS and MSM Nováky companies, and the Spanish manufacturer Fábrica de Municiones de Granada (FMG). The ZVS portfolio will be represented by 155 mm calibre artillery ammunition as well as technological components for ammunition, such as igniters, initiators, etc. Also on display will be 155, 152 and 122 mm artillery training ammunition, as well as 125 mm tank and training ammunition produced by MSM Nováky. In Kielce, FMG will demonstrate 120 mm tank ammunition and 105 mm ammunition suitable for both artillery and tanks. In addition, ammunition for 60, 81, 98 and 120 mm mortars will be on display.