The international trade fair for defence technology and military vehicles Eurosatory 2022 will take place in Paris from 13 to 17 June after a six-year break. About 1800 manufacturers and sellers of special equipment from more than sixty countries and the companies of the CZECHOSLOVAK GROUP holding company and the TATRA TRUCKS company, which are traditional participants at this fair, will also be among them. 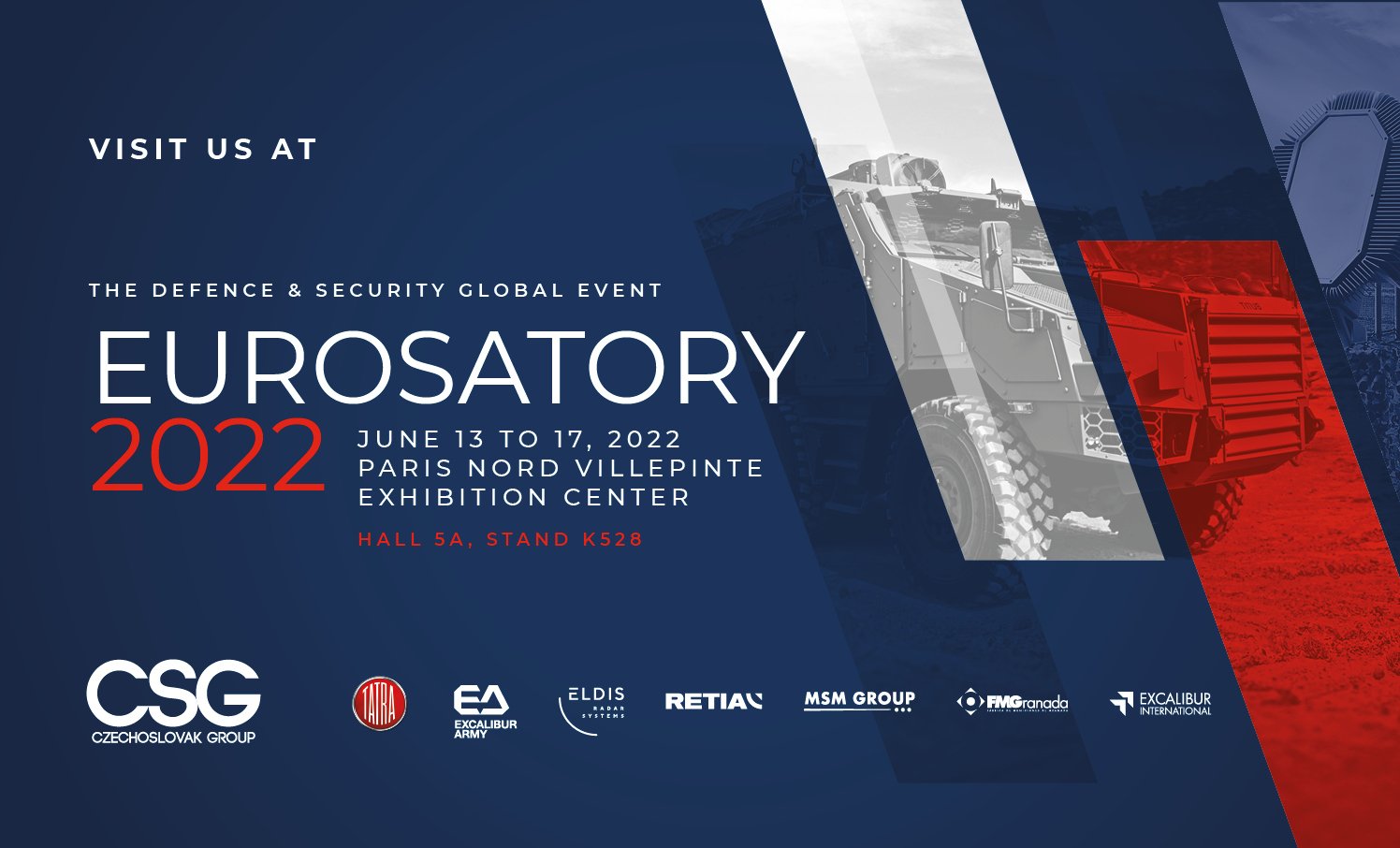 The companies of the CZECHOSLOVAK GROUP (CSG) and TATRA TRUCKS will represent the Czech and Slovak defence industry at stand K528 in hall 5A, where they will present news and products from their portfolio. This year's joint exhibition of CSG and TATRA TRUCKS is the largest Czech stand at this prestigious trade fair. Among the exhibitors will be EXCALIBUR ARMY, TATRA TRUCKS, ELDIS, RETIA, MSM GROUP and EXCALIBUR INTERNATIONAL. This year's Eurosatory will be very special, especially for EXCALIBUR ARMY, as it will present two new products in its world premiere.

The first will be a prototype of the new self-propelled wheeled howitzer MORANA of a new concept. This modern artillery system on the Tatra Force 8x8 chassis has a 155 mm cannon with a barrel length of 52 calibres installed in an armoured rotating turret. It is a fully automated artillery system that is fully compliant with NATO standards and can conduct highly effective target fire thanks to modern electronic systems and main weapon performance. The new howitzer has a modular construction, while the turret with weapons and ammunition can be installed on various chassis, including tracked.

Another world premiere presented by EXCALIBUR ARMY will be the tactical rescue and evacuation vehicle TREVA-30, also built on the Tatra Force 8x8 chassis. Conceptually and generationally, it is a completely new rescue and recovery wheeled system of Czech origin. The vehicle is equipped with a winch with a basic haul of 25 tons and a two-winch crane with a load capacity of 30 t. It uses an installed hydraulic fork in the rear of the vehicle to move automobiles, armoured wheeled vehicles, and other equipment. The vehicle is equipped with an armoured four-door cabin, which can accommodate not only the driver and operator but also the crew of the towed vehicle. A novelty in the EXCALIBUR ARMY exhibition will also be the Karancho mounting system designed for a heavy machine gun KPVT of 14.5 mm calibre.

TATRA TRUCKS will present another vehicle in the joint CSG exhibition at Eurosatory. It will also be a world premiere, the Tatra Phoenix 8x8 military heavy truck with a new armoured cabin produced by TATRA DEFENCE VEHICLE. The cabin is based on the DAF CF series armoured truck project on a Tatra chassis developed for the Belgian army. The new cabin provides high ballistic and anti-mine protection of the crew up to level 3 according to STANAG standards.

ELDIS company will exhibit scale-models of its airport radars production portfolio at Eurostary. It will be, for example, the primary surveillance radar RL-2000 and the monopulse secondary surveillance radar MSSR-1, but also a combination of these two radars RL-2000 / MSSR-1. Another important product of the ELDIS company is the proven and commercially successful precision approach radar PAR-E. With its products, the company has recently succeeded, for example, in Czechia, Slovakia, Germany, Poland, India, Indonesia, China, Pakistan and Malaysia.

The RETIA company will present a scale-model of the ReGuard multi-purpose 3D radar. This pulse-Doppler radar is designed for the detection and simultaneous tracking of ground targets and slow low-flying objects with a small radar cross section (LSS). Radar allows simultaneous tracking of ground and air targets and can recognize a wide range of objects. It is therefore suitable, for example, for the protection of point targets or important infrastructure.  It is well used in anti-drone systems, e.g. in guarding airports, but also in air defence systems.

In addition to the ReGuard radar, RETIA will also be exhibiting the unique ReTwis 5 radar. This lightweight and portable radar can detect and monitor persons and animals behind a wall or other non-metallic obstacle. Thanks to its features and capabilities, ReTwis 5 ranks at the top in its field, as evidenced by the fact that it has won contracts with security forces in Czechia and other countries, such as the USA.

EXCALIBUR INTERNATIONAL, which operates as an export agency representing the companies of the CSG industrial holding on the international market, will also have its representatives at this year's Eurosatory. The company will introduce its services and projects to potential partners and customers through audio-visual presentations and meetings. In cooperation with the company RETIA, it will then present the MRAD air defence system.