The group MSM GROUP, Slovak part of the holding CZECHOSLOVAK GROUP (CSG), was successful in the tender and took over in its ownership the company IMK 14. Oktobar. The traditional Serbian company went bankrupt two years ago and radically reduced its production. 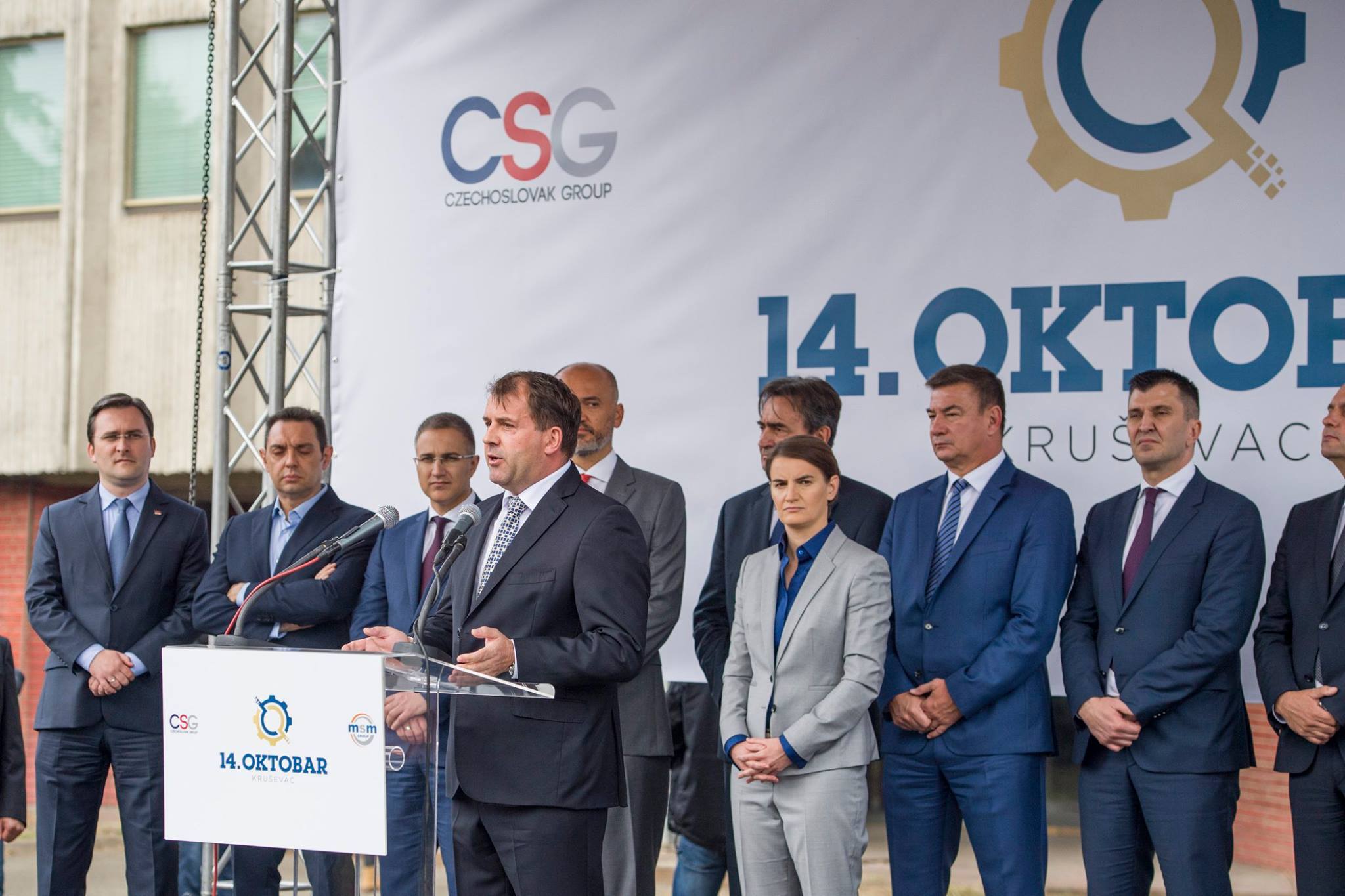 The industrial holding of CSG, which has saved in Czech Republic and Slovakia several traditional industrial companies, has in this way expanded its activities outside the territory of former Czechoslovakia. In the Serbian company it plans to restore production in the near future. The contract price is not public.

„The Creditor´s Committee has agreed the taking-over of IMK 14. Oktobar by MSM GROUP, and now there is nothing to prevent us from starting the rescue process of the company IMK 14. Oktobar  and return production to almost abandoned areas. We plan to re-launch the civilian production program that has been practically terminated, and at the same time set parameters for cooperation with both MSM GROUP and CSG holding companies, "said Marián Goga, President of MSM Group.

The Serbian company IMK 14. Oktobar, based in Kruševac employed even in the year 2007 approximately 8,000 employees. The company went to bankrupt two years ago and currently only 150 employees work here, whereas 75 percent of its current turnover is composed of production for the defence industry. The approval of the takeover by the creditors' committee enables to start working on strengthening the business segment and finding new business opportunities.

„"A difficult task is waiting for us, as the production in IMK 14. Oktobar was practically stopped in last two years. Now we shall start working very hard in cooperation with the new owner so that the company begins soon to prosper again. First of all, we are planning the audit of the production plant, recruitment of the staff for different positions, and acquisition of production orders, so that we can start production again, "said Vojislav Sparavalo, director of IMK 14. Oktobar.

At the tender for the purchase of IMK 14. Oktobar beside the holding of MSM Group also participated several other foreign companies. By the MSM GROUP, all the terms and conditions of the tender were met. The creditor´s committee therefore agreed to a change of owner and on October 2, 2017, a purchase agreement could be signed with IMK 14. Oktobar.

"We are very glad that we can begin to work to save another traditional industrial enterprise that had problems in recent years, but it also has a great potential to return to prosperity.  The Serbian company IMK 14. Oktobar needs to re-start production and ensure enough orders for the company. In similar cases the CSG holding already succeeded in several companies both in the Czech Republic and Slovakia, "said Michal Strnad, managing director of CSG Holding.

The holding CSG was already in the past able to save, in collaboration with business partners, the traditional Czech car manufacturer TATRA TRUCKS, the aircraft repair shop JOB AIR Technic, and the production in the company AVIA was after several years restored again in this year. In Slovakia, the holding is now working to save the traditional company ZTS Metalurg in Dubnica nad Váhom.

About the holding of CZECHOSLOVAK GROUP

"CZECHOSLOVAK GROUP (for short CSG) is a holding following the tradition of Czechoslovak industry, which supports and further develops the activities of traditional Czech and Slovak companies in the field of defence and civil industrial production. Its portfolio includes the production and sale of military and special vehicles, off-road trucks, weapons and weapon systems, ammunition, engineering products for automotive, railway and aircraft industry, or brake systems for rail vehicles as well as road transport and logistics services. The Group puts a strong emphasis on the quality of its products and services and on export activities. The holding company's products can be found on all continents and the number of its customers is still growing. Companies of the holding CZECHOSLOVAK GROUP employed in 2016 more than 6,000 persons and generated revenues in the amount of CZK 15.4 billions.

About the holding of MSM GROUP

MSM GROUP is a holding, covering subsidiaries with a portfolio in the defence and civil engineering industry segment. The group's goal is the strategic management of subsidiaries to effective acquisition of orders within their offer of services. Group companies with their portfolio cover the complete life cycle of ammunition, military wheeled and band technology and radio-navigation electrotechnology. Activities include development, construction, production, but also after-sales service, repairs, revisions or upgrades, including the offer of transfer of relevant technologies.

About the company IMK 14. Oktobar

IMK 14. Oktobar is a traditional Serbian company focusing primarily on the civil production program for building and agricultural machinery as well as classic cutting operations. A part of the portfolio is also the defence segment oriented to the production of large-caliber ammunition. The company was founded in 1923 as a company specialized in repairs and production of vehicles. The former important Serbian company was in bankruptcy two years ago. At present, it has only 150 employees and 75% of its turnover makes the production for defence industry.