The IDEX exhibition, regularly held in Abu Dhabi, United Arab Emirates, ranks among the most significant events in the field of defence technology and equipment in the world. Considering the significance of this trade fair, the companies associated with the CZECHOSLOVAK GROUP holding company and the TATRA TRUCKS automaker from Kopřivnice could not miss out on this event. 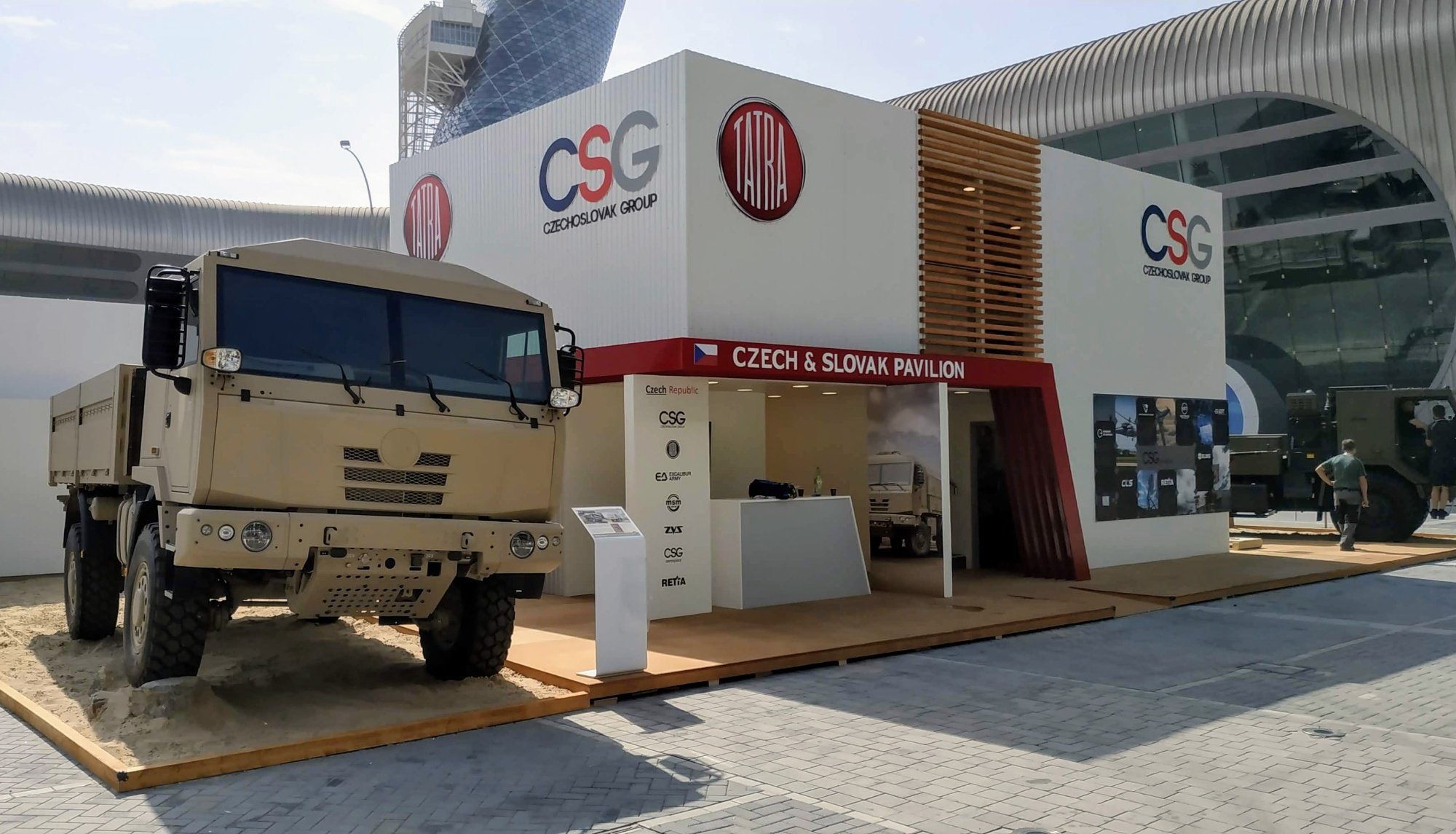 Last week, Abu Dhabi again held its biennial IDEX trade fair, showcasing hundreds of exhibitors from dozens of countries from around the world to tens of thousands of visitors and a great number of experts and official delegations. Some of the exhibits that received great amounts of attention were those of the Czech companies TATRA TRUCKS, EXCALIBUR ARMY, and RETIA belonging to CSG Aerospace division and MSM Group representing the Slovakian branch of the CZECHOSLOVAK GROUP, which all presented their products, services, and innovations. These and other stands of Czech companies were visited by Lubomír Metnar, the Czech Defence Minister, along with the rest of his delegation, demonstrating significant support for the Czech defence industry as a whole and for the efforts of Czech companies to succeed in demanding Middle East markets.

The main attraction presented by EXCALIBUR ARMY was the BM-21 MT 4x4 rocket launcher mounted on the TATRA FORCE chassis using the proven GRAD 122 mm launcher and equipped with a completely new state-of-the-art digital fire-control system. This fire-control system was the main focus of attraction; together with the proven TATRA chassis and the launching system design, these features appealed not only to experts and military delegations but also to representatives of competing companies producing artillery systems. Over the several days of IDEX 2019, representatives of EXCALIBUR ARMY held more than forty meetings and thereby managed to create a number of opportunities for developing their existing business opportunities and updating their partner network. By being present and by showcasing its products at IDEX 2019, the company also managed to create a good starting position for some tenders for the procurement of defence equipment to be launched by governments in Middle Eastern, African, and Southeast Asian countries.

The MSM Group presented to experts and visitors at the trade fair its entire portfolio of both small and medium-calibre ammunition, as well as modern ammunition for 155 mm artillery systems and 81 mm mortars.  ZVS handguns and ANTOS lightweight portable mortars were presented as well. The exhibits also included the newest project in the form of the Hornet anti-tank missile, including launching equipment, and its mock-up installation on a Czech Patriot 4x4 armoured vehicle.

For TATRA TRUCKS Kopřivnice, the IDEX 2019 trade fair was particularly significant as it unveiled its new TATRA TACTIC vehicle in its 4x4 version. The presentation of the new TATRA medium truck with an original TATRA-designed cabin was a major event that drew the attention of visitors and especially of official delegations and business partners of the Czech company. TATRA trucks are well established in this region, and they are even used by local armed forces, for example in the United Arab Emirates, Saudi Arabia (where they are also manufactured), and Jordan. Jordanian and Saudi Arabian partners also participated in intensive meetings regarding possible future cooperation. Thanks to the existing business relations between TATRA TRUCKS and the partners mentioned above, the company also showcased its TATRA PHOENIX 6x6 model in its military semitrailer tractor variant, which is in active use in Saudi Arabia and which may soon be used for transportation by other countries in this region and elsewhere.

RETIA, which is part of the CSG Aerospace division, was also one of the exhibitors at the CZECHOSLOVAK GROUP and TATRA TRUCKS stand. The company used the trade fair to unveil its ReGUARD radar. This is a multi-purpose 3D radar for the detection and simultaneous tracking of ground targets and slow-moving low-flying targets with small reflective surfaces. In addition, business partners and representatives of industrial companies, armed forces, and government institutions from all over the world showed interest in the latest version of the special ReTWis 5 radar device capable of detecting living objects and persons behind non-metallic obstacles such as walls. Discussions with and visits from the Ministries of Defence of Saudi Arabia and Kenya, the Dubai police, and leading representatives of the Egyptian army are definitely worth mentioning.

The importance of IDEX, which is held every two years, is constantly growing. This is evidenced by the number of exhibitors and visitors.  In 2017, over 1,200 exhibitors from more than 57 countries took part in the exhibition, and the attendance exceeded 100,000 visitors. It should be noted that in 2017, the CZECHOSLOVAK GROUP, TATRA TRUCKS, and their associated companies had the largest exhibitions by area of any Czech participant and held a prominent place among European exhibitors.

About the CZECHOSLOVAK GROUP

The CZECHOSLOVAK GROUP is a holding company that builds upon the tradition of Czechoslovak industry, supporting and further developing the activities of traditional Czech and Slovak companies in the fields of civil and defence-related industrial production. Its portfolio includes the production and sale of engineering products for the automotive, rail, aircraft, and watchmaking industries, as well as the production of special vehicles, off-road trucks, weapons and weapon systems, and ammunition. The group puts a strong emphasis on the quality of its products and services and on its export activities. Products produced by held companies can be found on every continent, and the number of its customers is growing steadily. The CZECHOSLOVAK GROUP's companies employ more than 8,000 people, and in the year 2017 they generated revenues worth CZK 25 billion.

In 2013, the TATRA TRUCKS joint-stock company took over the world-renowned carmaker based in the Czech town of Kopřivnice, which underwent a successful restructuring after the ownership and structural changes. In addition to standardised model ranges, it produces special trucks tailored to customer requirements. Eighty percent of the automaker's output is exported. TATRA TRUCKS employs about 1,000 people, and more than 600 employees work in the subsidiary TATRA METALURGIE, focusing mainly on foundry and forging. 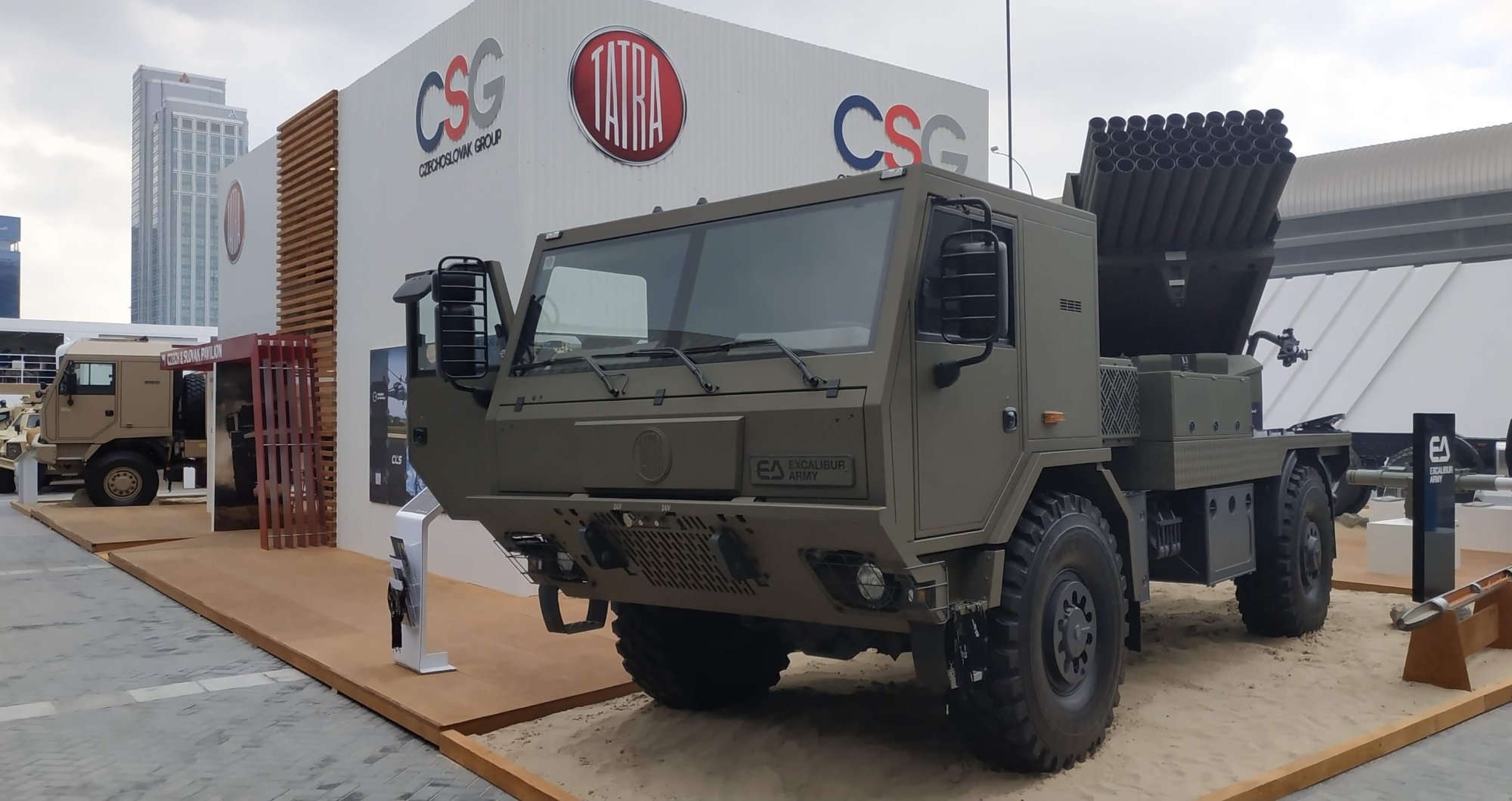