Still growing popularity of long-distance competition Africa Eco Race, which follows the original African Dakar rally, jumped into its second half and Tomas Tomecek, saddling his one-hundred-percent TATRA T 815 is in the excellent second place. And as the first truck driver in the history of the long-distance rally he fights completely alone with the difficult terrain in the cab of his truck. 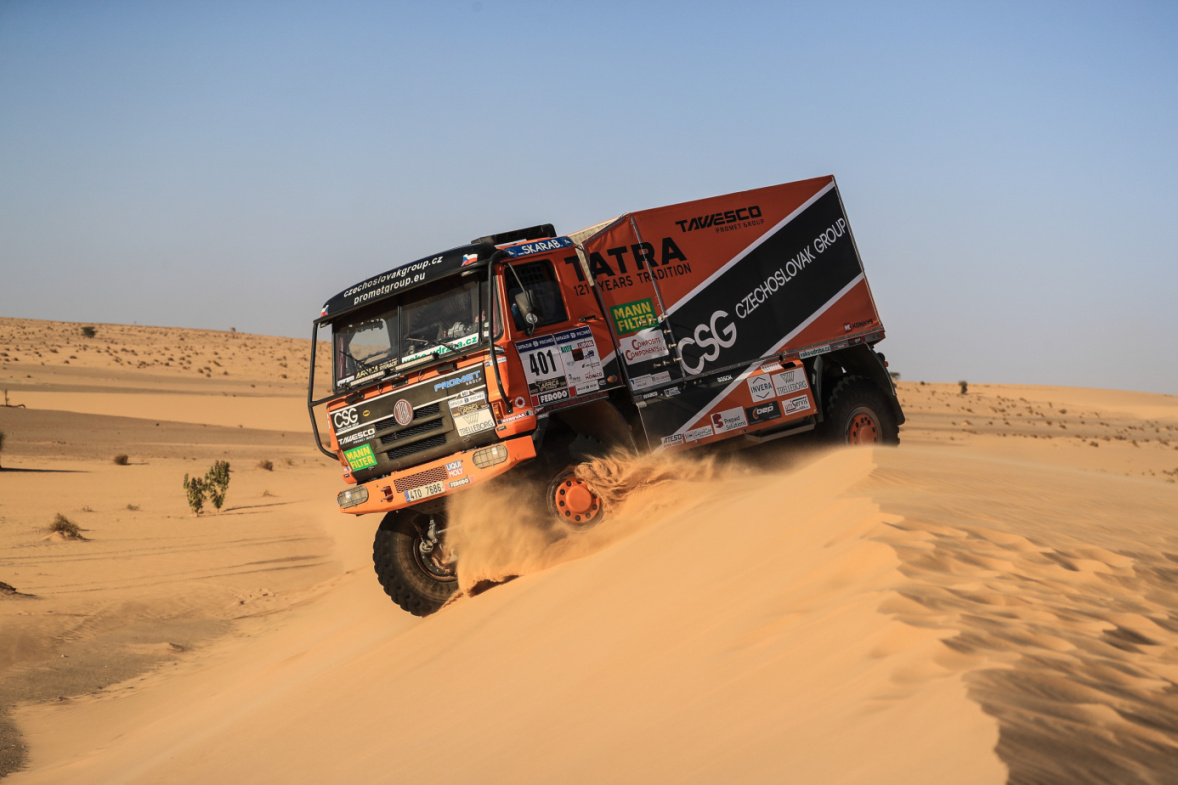 Yesterday, January 9 went the 7th stage of the Africa Eco Race, where Tomas Tomecek from Team Promet / Czechoslovak Group finished on the third place, holding the second place overall. For participants of a very difficult rally, which traditionally takes place in North Africa in the footsteps of the original Dakar rally (the witnesses also know it as the Paris-Dakar rally), wait still five stages before seeing the desired destination in the Senegalese capital of Dakar. Tomas Tomecek is an experienced matador of long distance races, he has twenty two starts on his account, and as a pilot he gained with his Tatra in Dakar silver and bronze place and as a navigator he stood on silver and also on the highest golden winner´s podium. In Africa Eco Race he won three times, two times he finished on the second and two times on the third place, always behind the steering wheel of his Tatra T 815 with Tatra twelve-cylinder.

This year's African race is another challenge for Tomas Tomecek. He decided to go with his truck into the dunes and treacherous ways without a crew, so he has to solve everything on his own, just like motorcycle drivers. No one has tried it before him, but Tomas Tomecek still prospers and holds the place at the head of the race. Before him goes only another of well-known long-distance racers Gerard De Rooy. For the navigation, Tomecek uses the same roadbook that have motorcyclists on their machines "I have found that motorcyclists had it completely different, they are more free. I like it very much, I always wanted this.“

If someone was sceptical of Tomecek's "solo", then from the second stage, when he got trough from the ninth to second place, he does not leave anyone in doubt about being a seasoned veteran of the long distance rally. It is also confirmed that his Tatra T 815 with its original Tatra air cooled engine, prepared with the support of Koprivnice car manufacturer Tatra Trucks, is still a powerful competition tool. And in addition, reliable, mechanics of the team Promet / Czechoslovak Group  are just doing regular maintenance on the racing Tatra and changing the worn out tires. However, the race is not over yet and at the question whether he wants to run in the cab alone also in the future, Tomáš Tomeček said: "It's new, I do not know it at the moment. But I'm very pleasantly surprised, that I really like it. So it could be good, but I don´t want to anticipate anything. "

To traditional main sponsors and supporters of Tomáš Tomecek's racing team belong the Promet team and holding Czechoslovak Group, part of which is also Tatra Trucks of Kopřivnice.

About the holding of CZECHOSLOVAK GROUP

"CZECHOSLOVAK GROUP (for short CSG) is a holding following the tradition of Czechoslovak industry, which supports and further develops the activities of traditional Czech and Slovak companies in the field of defence and civil industrial production. Its portfolio includes the production and sale of engineering products for automotive, railway and aircraft industry, or brake systems for rail vehicles, horologic industry, special vehicles, off-road trucks, weapons and weapon systems or ammunition. The Group puts a strong emphasis on the quality of its products and services and on export activities. The holding company's products can be found on all continents and the number of its customers is still growing. Companies of the holding CZECHOSLOVAK GROUP employed in 2017 more than 8,000 persons and last year they generated revenues in the amount of CZK 15.4 billions.