Industrial holding CZECHOSLOVAK GROUP in cooperation with the CEVRO University invited to Prague two influential Americans, who has attracted special guests and also Worldwide media to Czech metropolis. Steve Bannon, American republican, served as a chief strategist for Donald Trump and Lanny Davis, democrat, former White House special counsel met each other in debate on Prague’s Žofín on 22nd of May. The whole debate was moderated by the former Czech minister of defense and the second ambassador to USA Alexandr Vondra. 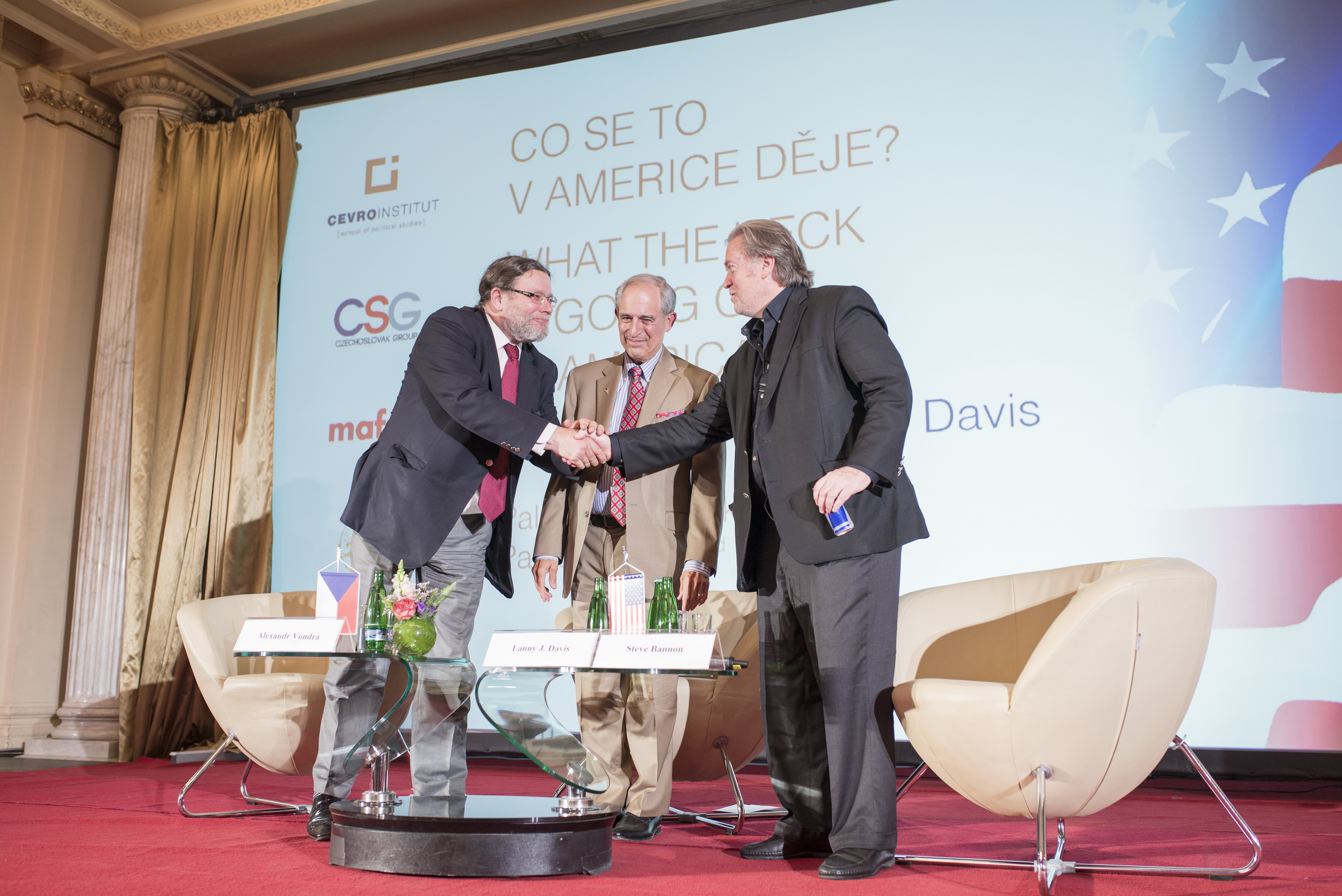 Both protagonists in addition to the two hours debate on the topic “What the heck is going on in America?” provided five hours of interviews to the media as BBC, Wall Street Journal, Washington Post or Bloomberg. Online stream from the debate was taking over by BBC and all the Czech major media. The whole event contributed to interest in the Czech republic and middle Europe in the Western world and especially in USA.

One day before the debate Lanny Davis visited several strategic Czech industrial companies of the Czechoslovak Group. And after that both Americans attended an informal meeting with Czech academics.

Andrej Čírtek, spokesman of the CZECOSLOVAK GROUP, says: “CSG is Western oriented industrial group operating mainly in machinery and defence industry. It has strategic ties and projects with US corporations or their subsidiaries: For Raytheon CSG provides the training of helicopter pilots and from General Dynamics European Land Systems, European subsidiary of GD Corporation, CSG obtained the license for manufacturing of wheeled armoured carriers Pandur. By organizing this debate we want to commemorate also the 100th anniversary of the modern Czech statehood, the milestone, which would be impossible without key support of USA and then president Woodrow Wilson. We also want to boost American interest in the Central Europe.”

Due to the great success of debate CSG doesn’t exclude the support of the similar events and invitation other important guests from the USA and other Western and allied countries, where  the holding CSG has a strategic and the business cooperation.

Stephen Kevin Bannon is former officer of US Navy, media expert, entrepreneur and right-oriented politician. He was the ´brain´ of the successful presidential election campaign of Donald Trump. After Trump was elected, Bannon served since January 2017 in the role of the White House’s official advisor. After leaving White House Bannon became highly critical about president Trump, using also his own news server Breitbart News.

Lanny Jesse Davis is an American lawyer, consultant, author and television commentator. From 1996 to 1998, he served as a special counsel to President Bill Clinton, and was a spokesperson for the President and the White House on matters concerning campaign-finance investigations and other legal issues. In 2005, President George W. Bush appointed Davis to serve on the five-member Privacy and Civil Liberties Oversight Board, created by the U. S. Congress as part of the 2005 Intelligence Reform Act. He is the co-founder and partner of the law firm of Davis Goldberg & Galper PLLC.

CZECHOSLOVAK GROUP (CSG) is a holding that builds on the tradition of Czechoslovak industry, supporting and further developing activities of Czech and Slovak companies in the field of civil and defence industrial production. The portfolio of CSG includes manufacturing of machinery products for automotive, railway, aerospace and watch

making industry, as well as specialized vehicles, off road trucks, weapons, weapon systems, and ammunition. The group puts a great emphasis on the quality of its products and services, as well as export activities. Products made by the companies of the holding can be seen on all continents and the number of customers is growing steadily. In 2017 the companies of the holding had over 8000 employees and generated a turnover of 25 billion CZK (app. 1 billion EUR).

CEVRO Institute is a private college based in Prague, Czech Republic offering undergraduate, graduate and post-graduate programs, many unique. It offers accredited bachelor’s and master’s programs focusing on legal and social sciences, within which students can study the disciplines of law, political science, economics, sociology, security, public administration and modern management methods.